Kevin Durant Had To Apologize For His ‘India Comments’ Kevin Durant Had To Apologize For His ‘India Comments’

During the tour, he set a new Guinness World Record. Durant and 3,459 Indian children from the Reliance Foundation Jr. NBA program set the record for the world’s largest basketball lesson, across multiple venues, ever.

But Durant had to issue an apology towards India, due to his comments about India’s development of basketball.

In an interview with The Atlantic, Kevin Durant was asked about his summer trip to India. KD said:

“I usually go to places where I at least have a view in my head. India, I’m thinking I’m going to be around palaces and royalty and gold — basically thought I was going to Dubai. Then when I landed there, I saw the culture and how they live and it was rough. It’s a country that’s 20 years behind in terms of knowledge and experience. You see cows in the street, monkeys running around everywhere, hundreds of people on the side of the road, a million cars and no traffic violations. Just a bunch of underprivileged people there and they want to learn how to play basketball.”

“Sorry that my comments about India were taken out of context, I’m grateful for the time I’ve got to spend there and I’m really pissed about how my comments came off, that’s my fault, should’ve worded that better,” Durant said a statement on his Twitter account. “I spoke about the difference between my imagination and reality there in Delhi and about where the game is compared to the rest of the world. No offense from this side, I’m combing back out there for more camps and cool shit. Sorry …..” 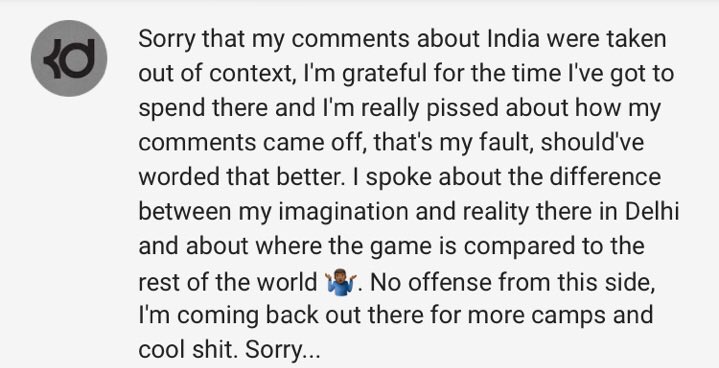